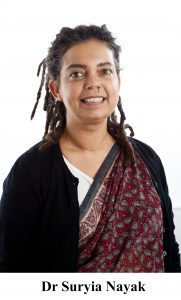 Dr Suryia Nayak is a Senior Lecturer in social work at the University of Salford. She has been working for social justice, and with intersectionality, for over 30 years, primarily within the Rape Crisis Movement, seeking to end violence against women and girls. Suryia has set up services and spaces dedicated to Black and Asian women. She employs models of Black Feminism to raise consciousness about the psychological and political impact of oppressive social constructions, seeing education as activism. Suryia also works as a psychoanalytic therapist and supervisor; she is training to be a group analyst. She is the author of The Activism of Black Feminist Theory: Race, Gender and Social Change (2015) and is co-editor of a volume on Intersectionality in Social Work: Activism and Practice in Context (2018). 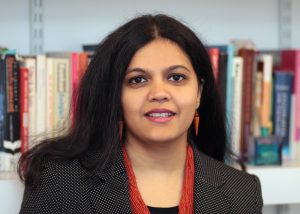 Dr Govinda is a Lecturer in Sociology at the University of Edinburgh. She has an MA from the Institut d’Etudes Politiques de Paris (Sciences Po), France and a PhD from the University of Cambridge, UK. Her teaching and research interests are anchored in political sociology, gender and development. Her research focus has been on gender politics at the intersections of movements for subaltern assertion, religious nationalism, and development in a neo-liberal era, examining in particular questions of mobilization and organisation of women, their multiple and intersecting identities – gender, caste, class, religion and region, their presence and representation in development policies and practice, and changes in the dominant gendered social relations, in both rural and urban spaces in South Asia, especially India. Her research has been published in Modern Asian Studies, Contemporary South Asia, Gender and Development, and Indian Journal of Gender Studies, among others. She is currently the UK lead on a UK-India Educational Research Initiative (UKIERI)/British Council funded project entitled, ‘Teaching Feminisms, Transforming Lives: Questions of Identity, Pedagogy and Violence in India and the UK’ (2017-2019), which seeks to contribute to ongoing debates on intersectional pedagogy and decolonising feminist knowledge production.