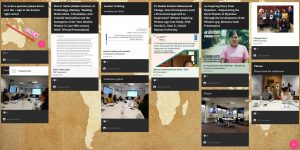 The papers and presentations demonstrated that although gender equality is a global issue, it is important to recognise the local dimensions that give the issue its complexity. The papers presented exposed and explained the ways in which women’s experience needs to be analysed at the intersection of a range of constituent components of identity such as race, class, gender, caste, religion, ethnicity, and sexuality, and placed within a particular societal and historical framework. The papers also emphasised the importance of acknowledging the positionality of the individual examining the intersectional politics of a particular situation.The emotional dynamics of intersectionality were discussed as well as the socio-political ramifications of intersectionality. The range of papers promoted a useful and wide-ranging discussion; the constraints placed on women were acknowledged, but the ways in which women have worked to empower themselves were also examined.

The following papers were presented: